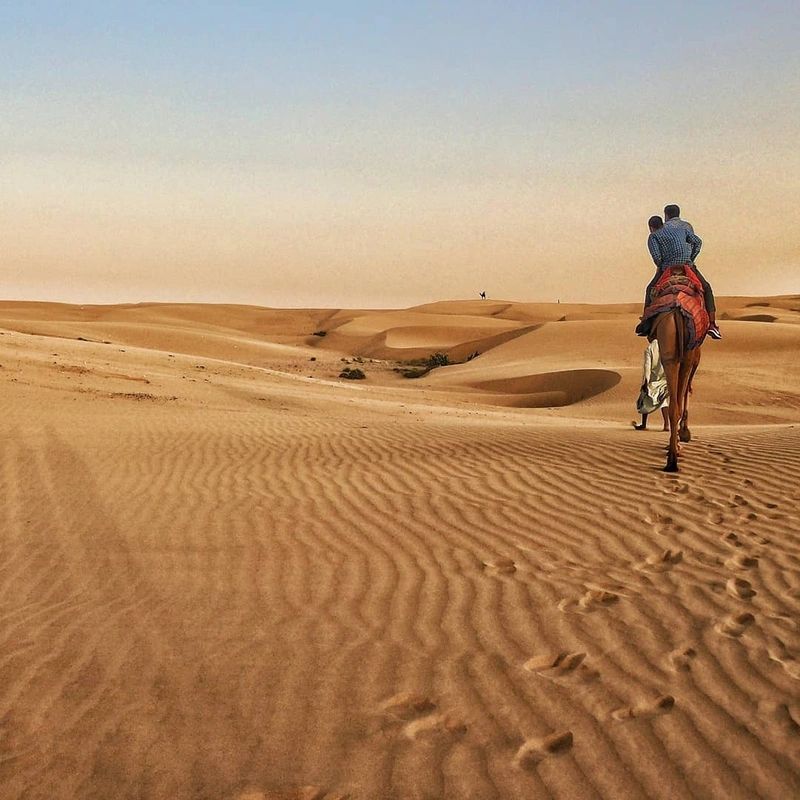 chat with us on whatsapp now!

NAMASTE! Welcome to Rajasthan, the land of maharajahs. This wonderland is a colorful mélange of magnificent forts that dominate skylines, lavish palaces that float on lakes, diverse cultures, delectable cuisines and hospitable people, set amidst a rugged yet inviting landscape. Here you will find every hue in Nature's grand palette - the red sands, the blue of royalty, the pink cities or the amber sunsets.

We meet at the Jaipur Airport & then transfer to our hotel / homestay in Jaipur, the bustling capital of the state of Rajasthan. We relax a while and get to know the group. For the panoramic view of the Pink City by sunset, we take a trip to Nahargarh Fort, after sunset stunning view of illuminated Pink City is thrilling.

Jaipur got its name from its founder Sawai Jai Singh (1693-1743), who had the vision to create a meticulously planned city as his capital. All the houses in the old city are painted pink, including the famous Hawa Mahal, thereby giving the city its alternative name, the Pink City. Later, we have the option to move to an ethnic village where we can experience the spectacular folk music & dance and end the day with a traditional Rajasthani dinner, at cost. Overnight stay at Jaipur. (-/-/-)

Jaipur offers a plethora of attractions. First, we visit the beautiful ninth gate of Jaipur known as the Patrika Gate. Admire the colorful arches which look picture-perfect in the morning light. Then, we visit the State Museum, home to large collection of jewelry, miniature paintings, costumes, folk art, and sculptures. Next to the honeycomb shaped Hawa Mahal or the Palace of Winds, built by Sawai Pratap Singh for the royal ladies to look at the proceedings of the bazaar below without being seen themselves.

We then visit the City Palace in the heart of Jaipur known for its blend of Rajasthani and Mughal architecture. Later, we visit Jantar Mantar, a UNESCO World Heritage site featuring the world's largest stone sundial & Panna Meena ka Kund, the historic step well & rainwater catchment known for its picturesque symmetrical stairways.

After lunch, we set out to the stunning 16th century Amber Fort situated just outside the city, an example of the fascinating blend of Hindu and Muslim architecture made from red sandstone and white marble – gives a grand view of the city down below. We also visit Jal Mahal, the water palace that is situated in the midst of the beautiful Man Sagar Lake.

Indulge in some of Jaipur’s most delicious street food at Masala Chowk. Locals and tourists alike gather here post sundown to gorge on samosas, chaat, gol gappas and of course, some chai. Do some evening shopping, as Jaipur is famous for a variety of goods such as gems, bangles, silver jewelry and exquisite handicrafts. Overnight stay at Jaipur. (B/-/D)

Today, we head to Jodhpur, founded in 1459 by Rao Jodha. Jodhpur was the capital of the state of Marwar during the rule of the Rathore clan. Popularly known as the ‘Blue City’, most of the architecture – forts, palaces, temples, havelis and even houses in Jodhpur are built in vivid shades of blue. The strapping forts that tower this magnificent city sum up to a spectacle you would not want to miss. Upon reaching Jodhpur, we check into our hotel / homestay.

After some rest, we visit the imposing and magnificent Mehrangarh Fort Complex. Located on an elevated hilltop right above the city, this imposing structure overlooks the splendid city of Jodhpur, and has done so since 1450 when it was first built by the historical figure Rao Jodha. You will view the intricate sculptures and carvings throughout its walls as well as walk through its immense, far-reaching courtyards. Rudyard Kipling described Mehrangarh Fort as “A palace that might have been built by Titans and colored by the morning sun”.

Exploring the forts gives you a feel of the times when the Rajput might was at its peak. The gates and the walls of the forts speak of the battles they have witnessed. From here, we proceed to Jaswant Thada, another ornate piece of architecture in Jodhpur. This beautiful building, with its intricate design, carvings and more, stands shining in the sunlight. This cenotaph, or empty tomb, is dedicated to the father of Maharaja Sardar Singh, Maharajah Jaswant Singh, for whom the structure is named.

Later, we visit Umaid Bhawan Palace, the elegant palace built between 1928 and 1943 is the home of the erstwhile Jodhpur royal family and currently one of the world’s largest private residence. The palace has one thing in common with the iconic Taj Mahal at Agra—the palm court marble used in its construction. Perched on Chittar Hill, the highest point in Jodhpur, Umaid Bhawan Palace inspires with exotic viewsof the historical Blue City, vast sand dunes, and intimidating Mehrangarh Fort.

This morning, we depart to Jaisalmer, widely known as “The Sun City”, located on the threshold of the picturesque Thar Desert close to the Pakistan Border. Jaisalmer is named after Maharawal Jaisal Singh, the founder of this city. The city is well-known as the “Golden City” owing to its yellow sandstone that’s found in this area and used vastly for construction. The grand sand dunes also add to the golden hues of the city.

Enjoy a sun downer on the Sand Dunes while watching a mesmerizing sunset before calling it a day! You have the option of taking a camel safari here though we as an ethical travel company discourage it. Overnight stay at Jaisalmer. (B/-/D)

This morning, we set out to explore the living golden yellow Fort of Jaisalmer also known as “Sonar Qila” built in 1156, where a quarter of the city’s population still resides. The fort rises from the desert sands like a mirage, a sight to behold, defended by its 99 turrets. Walk through the maze of tiny lanes lined with temples, havelis, and palaces as well as souvenir shops and skilled artisans. Finally, feast on panoramic views of the city from the numerous ‘cannon points’. Raj Mahal (Royal Palace), Laxminath temple and Jain temples are the main areas to explore within the fort.

Haveli hopping time! We visit the infamous Patwon ki Haveli, a set of five houses wedged into a narrow street and built by five Jain brothers who traded in jewelry and brocade. It is renowned for its ornate wall paintings and mirror work, intricate yellow sandstone-carved jharokas or balconies, gateways and doorways.

Follow it up with a visit to Salim Singh Ki Haveli with its roof lined with dancing peacocks and tuskers, 38 balconies, spacious corridors and a facade shaped like the stern of a ship. Next, we visit Nathmal Ji ki Haveli is a beautiful ornate architecture, built as the residence of the former prime minister of the kingdom, Diwan Mohata Nathmal. The exquisite exteriors are adorned with beautiful carvings and virtuoso work where two elephants made of limestone guard the entryway to the haveli.

We then visit the Gadisar Lake constructed by the first ruler of Jaisalmer, Raja Rawal Jaisal. The bank of the lake is surrounded by artistically carved Chattris, Temples, Shrines, and Ghats. We conclude the day with a visit to the Desert Culture Centre and Museum that houses a large collection of traditional ancient scriptures, artefacts and instruments in addition to a vast collection of weapons, jewelry and handicrafts.

Gulp down a glass of cool thandai-like Lassi to quench your thirst and engage in some shopping in the streets of Jaisalmer. You will find a mix of mirror-worked skirts, hand embroidered jootis, chunks of silver jewelry and so much more. Overnight stay at Jaisalmer. (B/-/D)

Today after breakfast drive to Bikaner which lies in the center of Thar Desert. The city is bestowed with rich history and vibrant culture, coupled with magnificent architecture that will leave you awestruck. The old city is encircled by a seven-km- long city wall with fine entrance gates, constructed in the 18th century. An old saying is that Bikaner has “five famous treasures”—its camels, wealthy merchants, rich candies, gold jewelry, and beautiful women. Once considered India’s “wild west” filled with bandits and robbers — the lingering flavor of an old, wild desert town remains. Check-in to the homestay / hotel on arrival.

After some relaxation, we visit Junagarh Fort, built in the year 1593 AD by Raja Rai Singh (1571-1612 AD), the 6th ruler of Bikaner. The Fort is a formidable structure & largely remained unconquered during its eventful history. It houses a number of beautiful palaces, temples & pavilions which are richly decorated. The beautifully maintained rooms of Anup Mahal now display the treasures of the Royal family. The Fort Museum has an extensive collection of illuminated manuscripts, jewelry, weapons, treaties, decorations & Farman’s (King's Orders).

We then visit Lalgarh Palace, the epitome of Indo-Saracenic style of architecture built by Maharaja Ganga Singh in the early 20th century. Built from red sandstone, this three-storey palace is a stunning example of the architectural brilliance of the modern Rajput clan. Nuances of Mughal, Rajput and European architectural elements can be seen in the structure. Talking about the design aesthetics, the stately palace features finely carved stonework, exquisite pillars, fireplaces, beautiful filigree and lattice work, and other embellishments that reflect the golden past.

Also make a visit to the Camel Research & Breeding Center engaged in the research and development of camels. It is interesting to watch camel calves gamboling around and also quite spectacular when the camels return from a day out in the desert. Overnight stay at Bikaner. (B/-/D)

This morning, we depart to Jaipur and get dropped at the airport. It’s time to bid good bye to your co-travelers. Take the return flight home with bagful of sweet memories!!! (B/-/-)

The itinerary is loosely drafted, and allows you to do as little or as much as you like.

This itinerary is just to give you an idea on the tour structure but in no means final and is subject to change.

The trip commences & ends in Jaipur. Pls ensure that you arrive before 11AM on Day 01 & depart after 5PM on Day 07.

INR 19000 per person (Including the Non-Refundable Booking Fee)

Please confirm your participation by paying INR 5000 (Non-Refundable) to book your seat. Rest to be paid 30 days before the trip start date.

Pls write to us at unusualescapes@gmail.com for our Bank Account Details to transfer the Booking Fee (or) pay via Google Pay at 9052220466. Your spot will be confirmed as soon as we receive your Booking Fee.

**If you can find anyone else to replace you, there’ll be NO cancellation charges. We will then refund your money in full including the non-refundable booking fee.

Pls write to us for cancellation conditions & other queries.

Interested in joining us on this trip to Rajasthan

For the born traveller, travelling is a besetting vice. Like other vices, it is imperious, demanding its victim’s time, money, energy and the sacrifice of comfort.